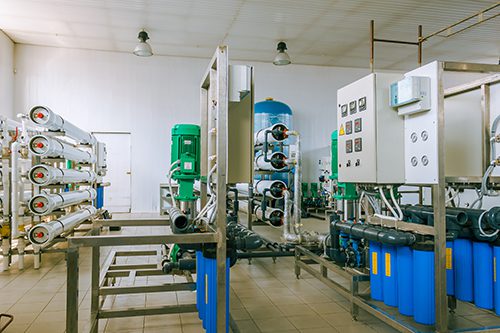 A beverage plant in the eastern U.S. was seeing high salt passage (permeate conductivity) in their new reverse osmosis (RO) membranes. Sulfite passage through the membrane was also causing excess chlorine consumption in the permeate clearwell, leading to increased costs. Additionally, commodity sodium bisulfite solution (SBS) was gassing off in the RO room, which resulted in a pungent odor so strong that it caused eye and throat irritation. Foot traffic on a nearby pedestrian walkway had to be stopped during product transfers because of the odor issue. Since the product transfer happens next to the production line, the odor also created a risk of lost production.

ChemTreat performed a full system survey and conducted extensive wet testing to understand the behaviors of sulfite, pH, and conductivity at this facility. The wet test data and RO operational parameters were entered into ChemTreat’s CTVista®+ RO Configurator and Normalization tool for trending and analysis.

The ChemTreat team found the lack of natural alkalinity in the RO feedwater was reducing buffering capacity, which meant the chemical treatment was impacting the feedwater pH.

ChemTreat recommended switching from commodity SBS treatment to RL1254, our high-pH dechlorination solution. This technology has a pH of 9,9 (compared to 3,6–3,8 for SBS), which would provide the needed feedwater pH shift to avoid permeate clearwell sulfite residuals.

The switch from SBS to RL1254 resulted in the following benefits: